Suppose that you want to create a model that generates spatial locations of trees. You want the model to be stochastic, so that each time you generate a forest, you end up with a different configuration of trees. The relevant tool is a spatial point process; mathematical details are described in books such as An Introduction to the Theory of Point Processes by Daley and Veres-Jones. Each forest that you generate is called a realization of the process.

Further suppose you mark out a particular region, and generate many different forests, each time counting how many trees fall within the region. If your model is realistic, then, for some of the forests, the selected region will be empty (you will count zero trees) while for other forests, a cluster of trees will fall in the region (and you will count a large number). A good model will produce a distribution of counts that is overdispersed.

There are two simple examples:

The Wolfram CDF module below (download CDF here)1 illustrates these two processes. The number of trees in a unit area follows a negative binomial with parameters r and p; you can manipulate these parameters with the slider bars. Hitting the Generate button produces spatial patterns for trees according to the two processes. 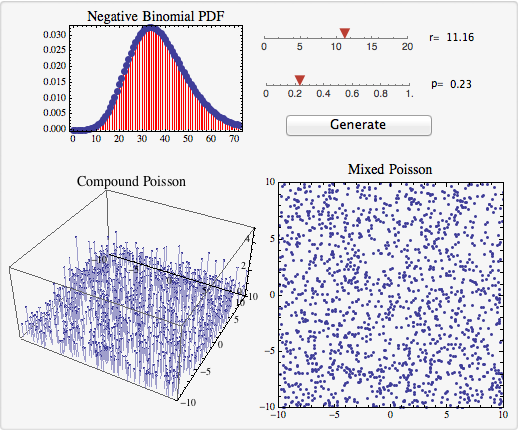 There are two things to notice. The plot for the compound process has an extra dimension: the height of the points indicates the number of trees that are located at that point. This is a problem, because it’s not very realistic to have multiple trees in the EXACT SAME LOCATION.

The mixed Poisson process has a different problem. The forests it generates are NOT CLUMPY. Even though the tree counts in a region follow a negative binomial distribution over a large number of realizations, the spatial distribution within a single realization is Poisson.

Mathematically, the compound process described above is not “orderly” (more than one tree can occupy the same location), and the mixed process is not “ergodic” (averages of a single realization over a large spatial scale are not the same as averages of a small region over many realizations). To model clumpy forests, we want a spatial point process that is orderly and ergodic. We also want the process to be stationary (the counts should be translation invariant, so that the counts are independent of location).

I have bad news for you: there are no stationary, orderly, ergodic spatial point processes that have negative binomial count distributions. This issue was first examined in a great paper by Peter Diggle. Something has got to give in your model, so what should you sacrifice? The logical choice is the negative binomial property. Try a model like a Neyman-Scott process that is clumpy, stationary, orderly, and ergodic. Problem solved!